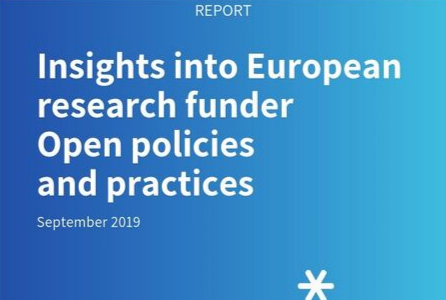 A report that reveals the Open Access and Open Science policies, incentives and practices of European funders is being released today. Based on a survey conducted in late spring, the report is a first of its kind to examine what key international funding bodies (international and national funding bodies, major charities and foundations, national academics and key research performing organisations) are doing to incentivise openness to the work they help fund.
The intention behind the survey, which was led by SPARC Europe in consultation with ALLEA, the European Federation of Academies of Sciences and Humanities, The European Foundation Centre (EFC) and Science Europe, is to spur even greater – more widespread – support for Open research; to advance Open Access to research results in Europe.

“For libraries, more rewards and incentives amongst funders in Europe clearly endorses the Open Science work that libraries have been leading on for many years,” said SPARC Europe Director Vanessa Proudman. “More movement among funders to strengthen their OA and OD policies is certain to have positive consequences for libraries working to achieve greater open access to research results as we’re seeing happen with Horizon 2020.”
Important to note is that Plan S, established in September 2018, is a promising means for researchers to provide more immediate Open Access to funder research. Studies like the RIF Project work in tandem with Plan S, for example, and serve to identify trends, gaps and good practices to inform and motivate more funders to embrace Open Science in policy and practice on multiple levels – some of which we share below.
Based on the survey, which garnered responses from 62 research funders from 29 European countries, SPARC Europe has compiled several suggestions. These are actions that funding organisations Europe-wide may consider embracing in an effort to help advance Open Access and Open Science although many are already demonstrating strong commitments to OA and OS; and we’ve paired them with data points from the survey:

To dig into the survey data in more depth, you can download the report in full.