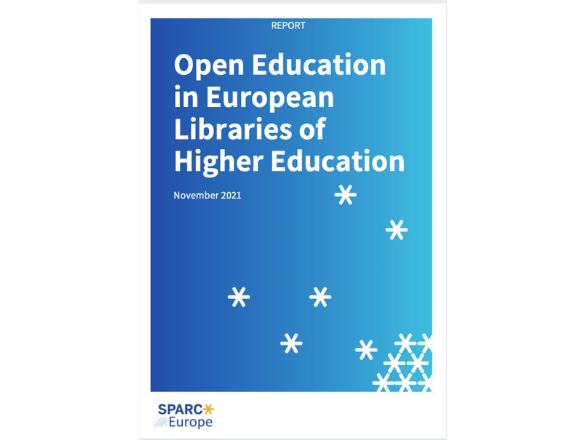 Hot off the press: SPARC Europe’s report on Open Education in European Libraries of Higher Education.

SPARC Europe has just released a long-awaited report Open Education in European Libraries of Higher Education. This report is the 2021 version of the 2020 report under the same title, which was the first of its kind. The 2021 report is framed by the UNESCO Recommendation on OER.

The report, authored by Gema Santos-Hermosa, Vanessa Proudman and Paola Corti is a result of research conducted earlier this year. The authors analyzed responses to a survey of European libraries of Higher Education on Open Education (OE) and Open Educational Resources (OER). The survey focused particularly on the work being carried out by academic libraries in Europe to implement the UNESCO Recommendation on OER. It saw over 230 responses from 28 European countries.

The report outlines the challenges, opportunities, and needs of European academic libraries in their efforts to implement and accelerate the Open Education roadmap. It highlights the pivotal role that they play in advancing Open Education in Europe.

The report authors note important developments towards progressing the Open Education agenda in Europe compared to last year. While significant progress has been made, there are still areas that need further attention, such as raising awareness of the UNESCO Recommendation on OER, investing in building capacity in the co-creation of OER and open textbooks, developing OE policies, increasing funding for OE projects, and investing in dedicated human resources.