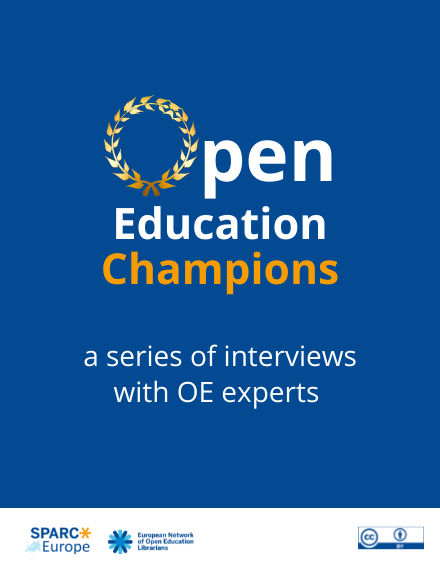 How can we draw attention to the importance of Open Education? SPARC Europe thought that one of the best ways would be to talk to OE experts and practitioners themselves and share real stories about their OE journeys: successes, challenges, and plans for the future. For the past few months, we have been diligently working on the Open Education Champions project, which launches today.

The project gathered an initial handsome group of thirteen OE Champions from nine European countries, and recruited members of the European Network of Open Education Librarians (ENOEL) to sit down with them for a series of in-depth interviews. The champions come from different backgrounds, work in various roles, and find themselves at different stages of their career paths, offering a broad range of perspectives on Open Education. They also provide insights into the librarian’s role in this evolving context.

In short, the Open Education showcase website shares the interviews and a video playlist with a recorded version of each conversation. We hope that these thirteen Champions of OE will inspire others to engage and experiment with and explore the practical benefits of Open Education and above all to encourage others to do the same.

Watch the trailer for the series here